A Community of Acceptance

REPORT SUMMARY: A Community of Acceptance – Respect for Thunder Bay’s Diversity 2001 Aboriginal peoples and visible minorities face racism in Thunder Bay, according to a new study issued by Diversity Thunder Bay. Racism has a significant impact on social cohesion in Thunder Bay, hindering cooperation, quality of life, and participation by various population sectors....

“Moving Forward – Challenging Power and Privilege through Anti-Racism Leadership Toronto – December 1, 2017   Report prepared by Rebecca Johnson Diversity Thunder Bay Members attending the meeting:  Ellen Chambers, Rebecca Johnson, Moffat Makuto, Brenda Reimer Quotes worth remembering from the Conference: Without vision we will never be more than we are. We are all...

Walking in the Light

Walid Chahal was keynote speaker at Matawa’s Walking in the Light symposium, which was held after the walk on Tuesday, October 18, 2016. He spoke on problematizing racism in Thunder Bay. Matawa consists of nine self-governing First Nations communities on their sovereign territories in the north who, as noted on their Unity Declaration, are connected... 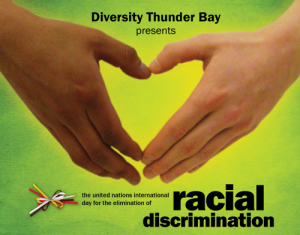