Coming Together To Talk with Youth -A Community Conversation of Hope, April 2019

It is with great excitement that the Organizing Committee for “Coming Together to Talk with Youth – A Community Conversation of Hope” presents this report. The event took place on April 30, 2019 at Lakehead University, bringing together students from Lakehead Public Schools and Thunder Bay Catholic School Boards, Dennis Franklin Cromarty High School, and Matawa Education and Care Centre. Representatives from school boards and education authorities were members of the Organizing Committee, together with Lakehead University, Thunder Bay Indigenous Friendship Centre, Regional Multicultural Youth Council (RMYC), Diversity Thunder Bay, the City of Thunder Bay, as well as others referenced later under Acknowledgements on page 68. We are proud that the report was written in a collaborative manner with members of the RYMC and author of the report, Lakehead University student and past president of the youth council, Wendy Wang. It is in fact the voice of youth.

The event brought together students in a setting that was safe and accepting, and all group discussions were facilitated by youth for youth. Only Elders were invited into some of the sessions. None of the adult organizers or teachers were part of the youth-led discussions. This made it a unique experience and for many Indigenous students, it was their first opportunity to be able talk about, and share difficult experiences of racism in a setting of only their peers. First Nation students from remote northern communities and newcomer students were present as well. Non-Indigenous students participated, many of whom had never been exposed to racism or commented that they did not understand how seriously it affected their peers.

The facilitators spent many days studying and becoming familiar with the material that was prepared by one of the co-producers of the film “Coming Together to Talk” – Ardelle
Sagutcheway. Working together with Anika Guthrie from Lakehead Public Schools, they created the workbook for the facilitators.

Michelle Derosier, filmmaker of “Coming Together to Talk” in a December 2016 interview with the CBC Radio at the premiere showing of the film in Thunder Bay explains: “I would love to have people who are interested, committed, and care about Indigenous young people and their lives, and bettering their lives in this community. I would like to see them in the seats Friday night.” she said. “And then for us to develop some strategies that will be led by the young people about how we in Thunder Bay can make this city safer for them.”

Ms. Derosier’s comments highlight why the Communications and Education Committee of
Diversity Thunder Bay brought their idea to the greater community to make this event happen. It was that committee’s original intent to listen to the youth and give them an opportunity to tell us, the adults, how to make our City the one we all want – a safe, vibrant, culturally diverse and accepting home for all – especially those who currently, tragically, do not find it safe. In reading the report, know that these words are the voices of the youth. They range from those who experience racism, to those who have invested in combating racism with their work at the RMYC, to students who learned about their peers’ reality. It covers a vast scope.

As the Organizing Committee met, it became clear that the event would raise awareness of the Seven Youth Coroner’s Inquest, specifically Recommendation 116, which calls on named parties to work together to increase public awareness in the City of Thunder Bay regarding the issues raised during the inquest, including the obstacles, challenges and racism faced by First Nations students from remote communities residing in Thunder Bay. The City of Thunder Bay, a key sponsor of the event, also supported the development of the film “Coming Together to Talk.” We are all proud of the youth who facilitated, gathering the information the students discussed, and developed recommendations for a more inclusive and safer Thunder Bay.

Youths from the RMYC also saw that the event could help them get closer to their goal of
creating “The Thunder Bay We Want” inspired by delegates they sent to “The Canada We
Want Conference” in Toronto earlier in the year. The youth are working on making the City more welcoming, accepting and inclusive, and this was within the reach of the event. The adults on the Organizing Committee were continually impressed and excited by the
contributions of the youth during our meetings. It was the youth who suggested that we must have ‘Hope’ in the title. It was indeed a conversation of hope.

When reading the report, please bear in mind that the youth themselves are proud of having their voices heard, their experiences read about and shared, and are especially delighted to be the authors of this unique youth-centric document from an event that gave them an opportunity to share and feel empowered. It’s now up to all of us to study their recommendations and work with community partners to make Thunder Bay truly a safer and inclusive place for all.
Ellen Chambers, Chair
Organizing Committee, “Coming Together to Talk with Youth, A Community Conversation of Hope”, and Chair, Communication and Education Committee (Diversity Thunder Bay).

COMING TOGETHER TO TALK WITH YOUTH FINAL REPORT 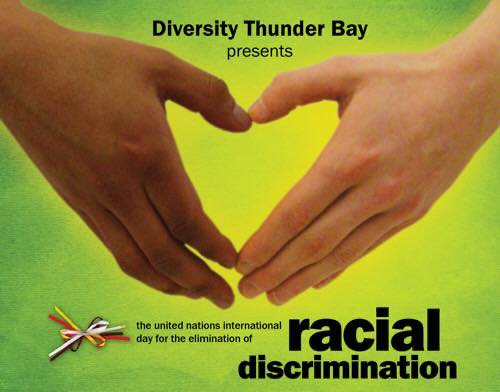